Isotopomer analyses have become a crucial next step for researchers with steady state metabolomics data. These analyses rely on the use of heavy atom labeled substrates such as C13 glucose. With the sensitivity of the capillary electrophoresis separation, we can accurately resolve the various isotopomers of the labeled metabolites. 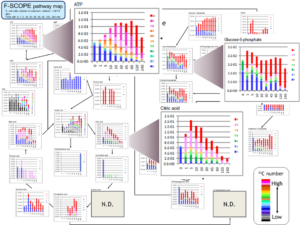 Heavy isotope flux analysis, which use substrates including 13C or 15N, provides insight into the direction and flow of those labeled markers, typically glucose or glutamine.

For glycolysis, lactate, the final product, is considered as an indicator of glycolytic output, but information from steady state metabolic levels is limited because it reveals only the balance between production and consumption. Labeling analysis using 13C glucose can quantify the production derived from glucose which is a direct indicator of pathway activity.

Heavy isotope analyses can also often be used to distinguish between multiple enzymatic reactions that result in the same product. For example, citrate can be formed from the traditional oxidative reactions of the TCA cycle, however, it can also be formed from a reversal of the cycle via reductive carboxylation. Unlabeled steady state measurements cannot definitively determine the directionality of the cycle. However, by using uniformly 13C labeled glutamine, a clearer picture can emerge as one carbon will be lost as C02 via the oxidative pathway, while all 5 carbons will be retained via the reductive pathway. Therefore, analyzing the change in percentage of 4 or 5 labeled carbons in citrate can give clues to changes in the directionality of the TCA cycle.

These approaches can identify metabolic targets for therapeutic intervention, as well as metabolic pathways that are altered as a result of treatment.

HMT is committed to providing our unique C13 analyses for cultured cells, as well as, in the in vivo setting.