HMT is the sole provider of Capillary Electrophoresis Mass Spectrometry (CE-MS) based metabolomic profiling.
CE affords a higher sensitivity and dynamic range compared to any other platform available. We provide a truly deep dive approach which allows for the detection of unknown and unique compounds. Together with our lipidomics platform, we offer the widest coverage of the metabolome commercially available.

Advantages of CE over LC and GC as a separation technique for metabolites include:

The high-resolution ability of CE enhances the separation of compounds, key to the identification and annotation of metabolites from a metabolome pool comprising of thousands of chemical compounds. There are a lot of metabolites with similar chemical structure and physical properties, with significantly different biological functions in biological systems. For example, the CE separation and identification of Pyruvate and Lactate, important intermediates and end-product of glycolysis, is essential for pathway understanding. CE can separate many other isomeric compounds, for example, Glucose-6-phosphate and Fructose-6-phosphate, which have the same chemical formula and molecular weights, are not resolved by LC-MS, but can be separated and quantitated by CE-MS. The employment of CE-MS in metabolomics provides higher resolution profiling of many metabolic intermediates including branched vs unbranched metabolites. Differences in fatty acid oxidation, biosynthesis, recycling, and changes in the microbiome are often represented by differences in these isomer abundances.

Together with high separation ability, the low sample volume in CE-MS enables accurate quantitation for a variety of metabolites. The low injection volume required for each sample effectively reduces the matrix effect, which is caused by a variety of ionic compounds including salt, protein, and RNA derived from biological samples. The reduction of the matrix effect is important for not only the separation of peaks in CE, but also quantitation capabilities. Within each sample, the composition of the salt, solvent, or too high of a metabolite concentration can cause ion suppression resulting in insufficient ionization of target compounds. Ion suppression will lower the intensity of detection peaks and decrease the performance of quantitation especially for high- and low- concentration metabolites in the sample.

Because metabolites exist with a large range of concentrations, a wide range of quantitation linearity is required for precise measurement for biomarker screening, relative comparisons, and quantitative measurements. CE-MS requires an ~50 nano-L injection of the sample solution and therefore has a lower ion suppression and higher peak intensity compared with conventional methods such as LC-MS and GC-MS. 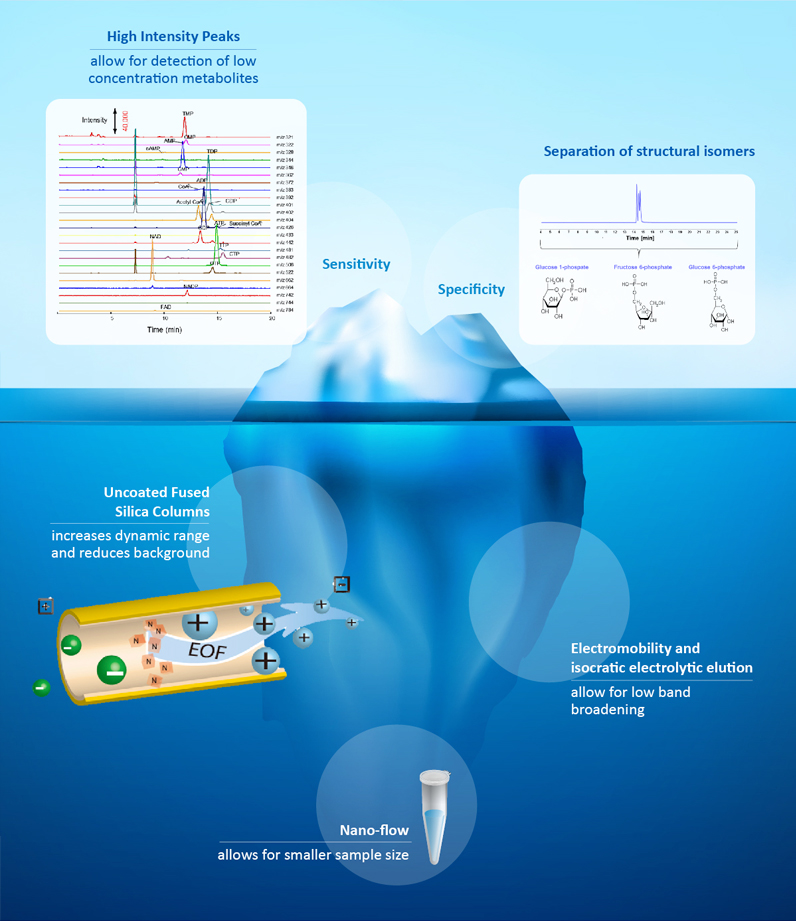 Capillary electrophoresis is called free zone electrophoresis because it uses uncoated hollow glass fused capillary tubes filled with only an electrolyte solution. An electric field is generated by applying a voltage to both ends of the capillary, the direction and rate of migration of metabolite ions depend on the physical properties of each metabolite.
Concurrent separation of hundreds to thousands of metabolites present in assay samples is achieved through differences in the mobility of ions. The rate of migration of such ions in an electric field is dependent upon size, charge, and shape of each metabolite.

Because CE is suitable for the separation of ionic and hydrophilic compounds, CE-MS based metabolomics has advantages in the measurement of compounds including organic acids, amino acids, phosphorylated sugars, nucleotides, etc. Clinical samples such as blood, urine, and CSF include many hydrophilic compounds secreted from cells, whose profiling is essential for biomarker discovery, analysis of disease progression or treatment effects.

The discovery of novel metabolites is now possible when probing the metabolome with this novel technology. The specific attributes that best suit CE allow for discovery of new metabolites not observed by the hydrophobic preference of LC. Such new metabolites may represent new pathways, new paths for recycling metabolites, nutrient processing, microbiome changes or more.